On the night of the 11th of April, a very special person joined Mandelbaum House for Formal Dinner. This special person is Eddie Jaku, a man filled with wisdom, with a very important story to tell: Eddie survived the Holocaust, a mass genocide where six million Jews were brutally persecuted and murdered by Nazi Germany during the Second World War. Many of us have learned about this dark period of history in school, yet nothing is as powerful as hearing this story from a person who has lived through the Holocaust as their reality. As a man who had experienced such injustice, torture, and hopelessness, Eddie proclaims to be the happiest man alive.

As a dear friend to Mandelbaum House, Eddie’s story has inspired and touched the hearts of many residents throughout the years. This formal dinner is no exception; in fact, many of our alumni came back to join us for this special dinner to see him once again. The cheerful and happy vibes filled the room throughout dinner, and Eddie continuously engaged with residents over the dinner table through conversations and laughter. Over dinner, he also joyfully informed us, that his birthday was coming up in a few days. On the 14th of April, Eddie Jaku turned 98 years old. 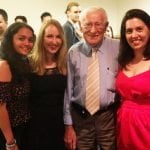 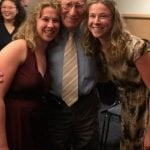 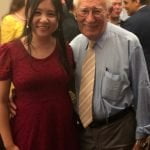 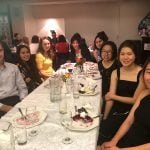 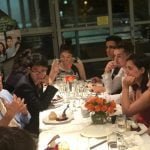 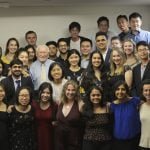 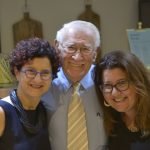 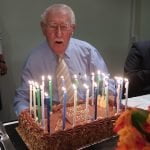 The highlight of our evening has to be Eddie’s speech. Eddie speaks with great eloquence and wisdom as he recalls on the events occurred in his life, including the vivid memories of when it all began. From a young engineer who returned home for a short visit, which developed into a series of events of brutality and separation from loved ones, to long on-foot journeys in the cold winter where a small glimpse of mercy and kindness were found along the way. Perhaps from these experiences, Eddie encompasses profound wisdom in regards to every aspect of what makes us human. Through his story of separation and survival, he elaborates on the importance of friendship and companionship, in which he accounts as what kept him alive. Most importantly, the biggest take-home lesson of Eddie’s story is the irrefutable need to learn from history, so that the mistakes of the past would not be repeated in the present and the future. Towards the end of his speech, Eddie made a short, yet powerful statement: “when you are sad, think of me”.

I am thinking of you Eddie, not because I feel down. It is because this evening is truly one of the most memorable evenings of my life. Thank you, and on behalf of Mandelbaum House, I would genuinely like to wish you a very happy birthday once again. You deserve all the happiness in the world.

In honour of Eddie, an annual prize in his name will be awarded to a resident who is a “mensch” and demonstrates qualities of integrity and honour. The prize will be presented in November.