One of the highlights in the Mandelbaum calendar is the monthly Formal Dinner. We were delighted to welcome back A/Professor Lilon Bandler to be our guest speaker for our first 2017 dinner. The evening began with a fantastic musical performance by  residents Chelsea and Kartik. During the introduction, we learnt that Lilon was a GP locum for the Royal Flying Doctor Service and has worked in general practice for many years.  She is also an academic at the University of Sydney and is responsible for curriculum development and implementation in Indigenous health education, ensuring learning and teaching by all medical students.

Lilon identified herself as the ‘grandchild of a slave and child of a refugee’. Even though her mother, Faith Bandler, is well known as the famous Australian civil rights activist who ran the NSW campaign for the 1967 Aboriginal referendum, she shared with us her father’s life course to encourage us to enjoy the process of being educated.

Her father was an Austrian  born Jew raised in Vienna and sent to Dachau and Buchenwald concentration camps. In order to flee and have a new life, her father’s aunt bribed people for his successful release, with a German typewriter and a ring and he took his younger half-brother and sadly needed to leave him in an orphanage in London. He eventually arrived to Australia as a refugee, and settled down in Sydney, as a civil engineer after local skill training.  She emphasized that her father’s experience had a huge influence on her: not only contributing to noticing the fact that culture was embedded in the consciousness so that people comprehend the context of time, history and geography; but also realised the significance of culture, for it explained a person’s identity and motivation. 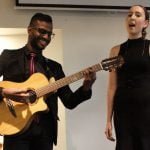 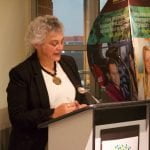 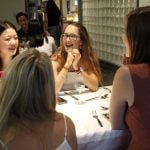 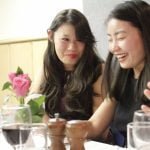 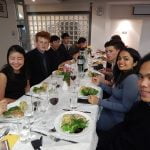 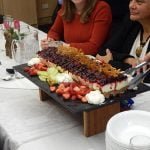 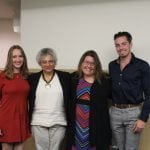 The college residents were asked to think about what would they take with them if they have to leave home immediately. Although there would have been so many potential choices and no absolute correct answer, Lilon shared her point of view that education is crucial, for no one can take it from you. She extended the definition of education, not merely the degree you undertook at school, but the solid skill or habit you learned from your family, your friend, and even your enemies.  Lilon’s father proved this by building their house in Sydney based on his trained skill, and then applied his knowledge in helping construct Sydney’s city water supply system.

‘It does not even matter whether your choice is right or wrong’, said Lilon, ‘as long as you bring your education, you will be able to have a brand new start.’ Just like what her father did, continuously renewing his understanding of education, you can escape from the past and learn something new in the present, and embrace the unknown but convertible future. Lilon herself is the best practitioner for those words, which is admirable because she has been on her unique pathway to know how she takes her place in this society, as a guide for students and a lifelong fighter for people who live a less privileged life.