At our mid-semester formal dinner on 1 May 2019, Mandelbaum House hosted my favourite guest: Eddie Jaku, the self-proclaimed ‘World’s happiest man’.

Eddie is a Holocaust survivor who lived in Germany throughout World War II. I have heard him speak several times over the years, first at the Jewish Museum when I was a young boy. This made his presence at our dinner, having just turned 99, seem surreal. As always, I gained something new from his words.

A fellow Mandelbaum resident told me that the night she first heard Eddie talk of his experiences, his loss and yet his positivity had such a profound impact on her that it will always be one of the most memorable of her life. She is far from alone in this.

Eddie began by telling us about his school days, when he had a passion for engineering and was a proud German boy with many friends. His story of what came next – separation, flight, capture and survival – will stay in the minds of everyone listening. You could see it happening in their faces. While Eddie was speaking to us, I sometimes looked around the room at the residents and college staff. They all had a similar expression of just being lost in his story. 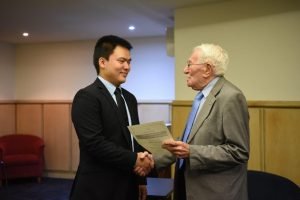 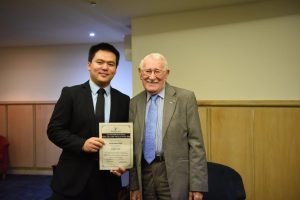 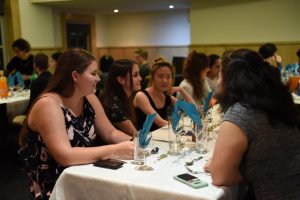 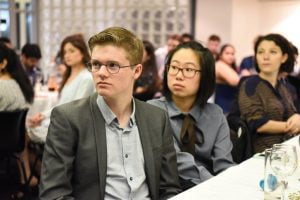 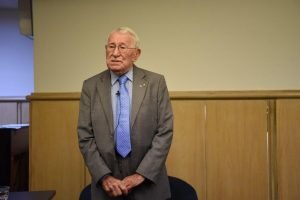 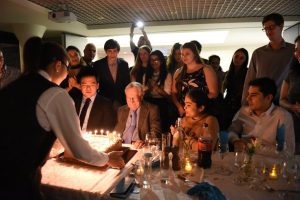 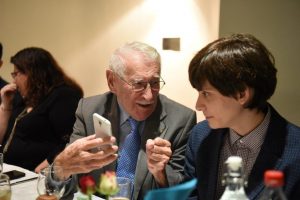 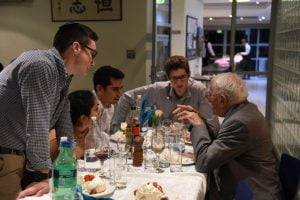 At the end of Eddie’s talk, he paused for reflection and encouraged us to never forget our history and the history of humanity. He said we must all remember what has happened, so that events like the Holocaust do not happen again. He finished with a lesson and a mindset that has helped me so much in my own life that I can never thank him enough: ‘When you are sad, think of me.’ I do not see this as Eddie asking me to compare his experiences with mine; rather, I see it as him simply asking me and everyone else to just smile.

Inspiring is too small a word to describe Eddie’s profound impact on the Mandelbaum residents and others he has spoken to over the years. After his talk there was an extra glow throughout the college and between everyone, reflecting our immense admiration. If you have not yet heard Eddie speak, I cannot encourage you enough to do so. I promise that it will change so much about how you think and how you react to the relatively minor challenges of daily life.

In honour of Eddie Jaku, Mandelbaum House established an annual prize last year, awarded to a resident who is a ‘mensch’ – meaning someone who demonstrates integrity and honour. The prize will be presented again later this year to a resident who, I am sure, has been touched by Eddie’s words and has chosen to act on his advice.