Last week saw the beginning of classes at the University of Sydney and the return of early mornings and all-nighters for about 60,000 students. In the midst of the whirlwind that is the new semester, residents at Mandelbaum House welcomed Chancellor Belinda Hutchinson AM for their first formal dinner of the year.

Belinda Hutchinson is a proud USYD alumnus who had a fruitful and varied career in consulting and became chairperson of several boards of directors before returning to the university as Chancellor in 2013. As someone who had the opportunity to sit across from the Chancellor and chat with her over dinner, I personally hope she stays for many years to come.

But I’m getting a little ahead of myself. The night started with residents meeting the Chancellor and welcoming her to Mandelbaum House, followed by a beautiful and moving musical performance by resident Chelsea Stutchbury.

Then we sat down to dinner and peppered the Chancellor with questions about her experiences and advice for people starting out in their careers. She talked about the importance of showing up and not being afraid of asking questions. Naturally she also had questions for us. We talked about Mandelbaum House and our community, and about Chelsea’s just-released album and why she’s donating the proceeds to the Icon Cancer Foundation and the National Breast Cancer Foundation.

When I asked the Chancellor to name her favourite quality in a USYD student, she said it was the ability to take advantage of their resources to help other people who don’t necessarily have the same resources. She gave the example of Jack Manning Bancroft, an Indigenous USYD student who started a program for university students to tutor local Indigenous high school students. This program expanded into AIME, the Australian Indigenous Mentoring Experience, which is now an international organisation. 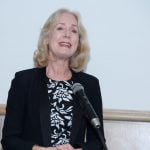 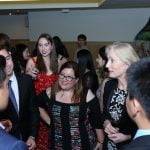 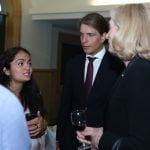 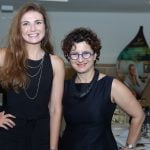 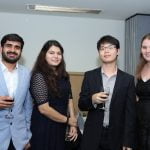 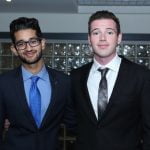 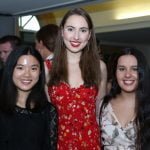 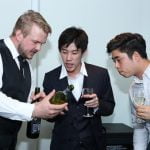 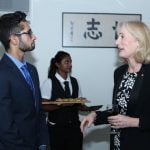 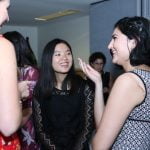 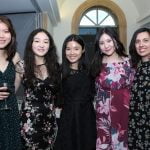 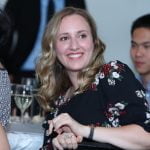 After dinner the Chancellor delivered an inspiring speech in which she spoke about the founder of Mandelbaum House, Rachel Lipton, who was one of the university’s pioneering female graduates. After graduating in 1918, Lipton became an English and Latin teacher. She initially donated money to the university in memory of her sister, Rose Mandelbaum, for a music scholarship. In her will, she bequeathed funds to establish a college called Mandelbaum House as a tribute to her parents.

The Chancellor also spoke about her own university experience and encouraged us to spread our wings and get actively involved in university life.

It was amazing to hear about her family foundation, which focuses on helping disadvantaged communities. For the past nine years it has worked with a non-government organisation called The Hunger Project in Malawi to help eradicate hunger in a community of villages. When she and her family visited this community of about 10,000 people last year, its members were celebrating their new-found self-reliance.

For me, it was humbling to see the Chancellor of a large university come to a dinner with just 38 students. This intimate event was a refreshing break from the large classrooms we spent the week getting used to – a time to sit together, listen to one another and enjoy great company, delicious food and inspiring music.