“How’s Eddie?” is one of the questions I most frequently receive when catching up with Mandelbaum alumni. There is always something interesting to relay about our special friend Eddie, be it the story he shared with us of a recent school excursion he guided at the Sydney Jewish Museum or new accolades he has received, including nomination for 2020 NSW Senior Australian of the Year.

Eddie Jaku will turn 100 this year and has recounted his incredible story of surviving the Holocaust to Mandelbaum residents for over 14 years. In 2019, just before his presentation at a Mandelbaum Formal Dinner, he casually told me that he would be speaking at the International Convention Centre the following week. At the time, I didn’t realise he was invited to be part of TEDxSydney. Only when my social media was filling up with tributes to “the best talk of the day” did it click that his reach, from thousands, will now be millions of people worldwide.

In 2018 we introduced the Eddie Jaku Mensch Prize at Mandelbaum House. This annual prize is awarded to residents who demonstrate qualities of kindness, integrity and honour and who make our college home a better place. It warmed my heart to see that 14 different residents were nominated last year. We sure attract amazing students! 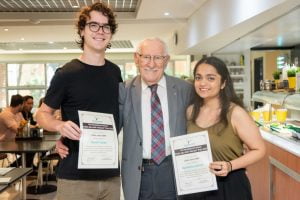 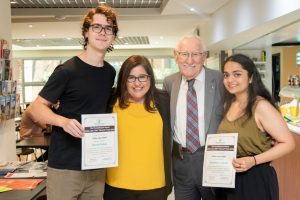 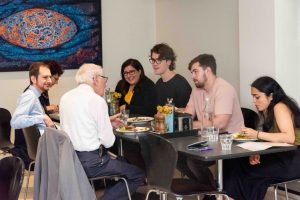 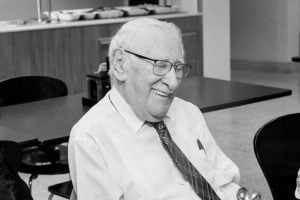 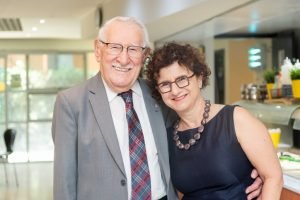 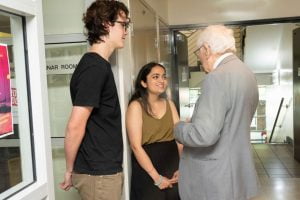 For the 2019 prize we had two residents who stood out, receiving five nominations each.

Mandelbaum Resident Assistant Karishma Luthria, a fourth-year Media and Communications student from India, received much praise, including “Kari is calm, helpful and dependable. She always greets you with a genuine and warm smile.”

Daniel Galan, an exchange student from Mexico, also made a significant positive impact on our college, with compliments including “Daniel goes out of his way to make sure everyone feels good and included and encourages everyone to try new things.” During Daniel’s semester in Sydney he also volunteered (120 hours) at Our Big Kitchen, a not-for-profit group which distributes over 80,000 meals per year.

Eddie returned to Mandelbaum to meet Daniel and Kari, along with other residents and staff, over lunch. We all felt invigorated after spending quality time with the self-proclaimed “happiest man on earth”. It is always wonderful to be around Eddie and to see the twinkle in his eye when he talks about Flore, his wife of 73 years.

We look forward to celebrating Eddie’s 100th birthday in April!