Tedeschi took the crowd through his journey into music and how it emerged to be his passion. From being a hand double playing the piano in the Oscar winning movie Shine to performing for dignitaries on a school night, he’s done it all and more. But, he says it was no easy feat. While it may look glamourous on the outside, there were a lot of sacrifices involved like long hours of practices and isolation.

He also commented on the constant, yet changing landscape of classical music in Australia and around the world, stating it’s “no longer sufficient to just play Chopin, but you also have to conduct yourself like Cary Grant and look like George Clooney. Luckily I have two of those covered!”. Whilst the audiences he has played for have tended to comprise of older generations over the years, Tedeschi says it too is changing with his upcoming work for a younger audience at the Sydney Symphony Orchestra’s program ‘Who needs a conductor Anyway?’.

Adaptability is an important quality to have, says Tedeschi. It is important to adapt to changing tastes, technology and being able to reinvent learning. He quotes Charles Rosen, the eminent musicologist, when he said that “The death of classical music is perhaps its oldest continuing tradition.” 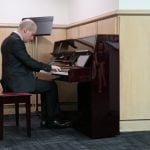 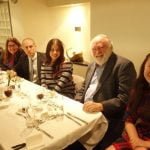 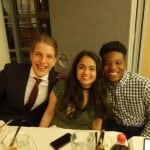 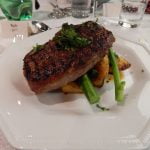 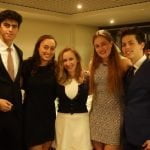 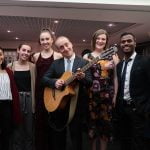 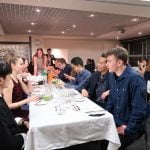 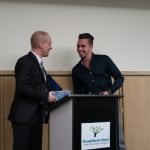 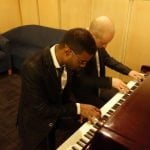 The highlight of Mandelbaum formal dinners is not only the fact that we get great food and conversation but we get life lessons, from people who have foraged out into the world and carved successful paths for themselves. From Simon Tedeschi, we learnt that sometimes the “hardest work gets the least recognition” but, its all worth it if it genuinely makes you happy.

The audience got lucky with not only one but two piano performances that evening- one  from  Mandelbaum ’s in-house talent Kartik Kuna and the other, a private classical piano show from Mr. Tedeschi. The two artists then had an impromptu jam session which was one of the most fun things to watch – two sets of hands collaborating to make one piece of beautiful soulful jazz. Our night at Mandelbaum couldn’t have ended better and we hope the wonderful Mr.Tedeschi and Ms. Spirovski had a great time too.